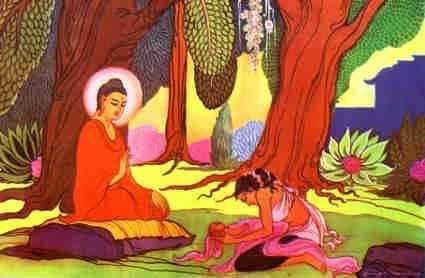 Maddened with grief Kisa Gotami carried the dead body of her son to Shakyamuni, hoping The Buddha would be able to magick her son back to life. The Buddha agreed to try. He needed some mustard seeds he said, from the household that has never seen death. Feeling hopeful, Kisa Gotami started knocking on doors and with each door that little flame of hope got dimmer and dimmer. Every household had been visited by death. All said that they had lost a child or a parent or a spouse or a sibling or more… Kisa Gotami began to realise. When she went back empty-handed to The Buddha, he explained that death was a certainty, inescapable and it was the attachment to all things temporal that was the cause of suffering. Kisa Gotami became a disciple of The Buddha and eventually she too became an Enlightened Being.

Cut to circa 2019, a gentle, loving, kindly man is horrified by the ever increasing, brutal episodes of rape in the country. He goes to a world famous scientist and asks her to develop a vaccine that would prevent rape. The scientist agrees that such a vaccine would indeed be possible, if and only if the man were to get a hair or a cheek swab of an adult woman who had never experienced any form of sexual violence. With her DNA, they would be able to create a vaccine to prevent rapes. The man begins his quest, he goes from house to house. But everywhere he goes, every woman he meets has a horror story to share, raped by a boyfriend, molested in a bus, sexually abused by a father, uncle, grandfather, gang raped, acid attack, paraded naked in the village square, made to abort all her female foetuses, barely escaped rape (so thankful), the stories go on and on. Some of these stories come from little girls and little boys, as young as 2 and 3, even 6 month old babies. The kind, good man grows increasingly despondent. It seems as though there isn’t a single woman who hasn’t experienced sexual trauma at the hands of a man. Then he has a brain wave. He is sure his wife had never experienced any abuse. He himself a gentle, good man, had always treated his wife with the utmost kindness. Yes, the answer to his prayers lay at his own doorstep. The man rushes home excitedly. He explains his quest to his wife and asks her for a strand of her hair. The wife doesn’t move. The man’s heart skips a beat. ‘What, dear one’ he asks, “Have you ever been sexually abused?”
‘Well’, she replies, ‘There were many times in our marriage that I didn’t wish to have sex with you, but you forced me to because you were in the mood.’
“Are you accusing me of rape,” the man asks, horrified.
‘I don’t know’ replies the wife, ‘I do know that it wasn’t always consensual and if I hadn’t agreed, you may have taken it out on the kids or me.’
The man then realised that he may not be able to cure the society of rapes, but he could begin to prevent it at his home.

A lot of our conversation over rape and sexual violence is escapist, looking for quick-fix solutions. Usually we veer wildly between cooking up mediaeval, barbaric punishments for the rapists and victim blaming of why didn’t she call 100 instead of her sister. And all the nuance of productive, gainful conversation slips away. We aid the crime and the criminal when we discuss the what and the who rather than the why. To be able to ask the right question we must listen keenly, not just enough to give unsolicited, often ill-thought out advice, but to be willing to be humbled enough to change our entire world-view.

“In order to escape accountability for his crimes, the perpetrator does everything in his power to promote forgetting. If secrecy fails, the perpetrator attacks the credibility of his victim. If he cannot silence her absolutely, he tries to make sure no one listens.”
Judith Lewis Herman, Trauma and Recovery: The Aftermath of Violence – From Domestic Abuse to Political Terror

My friend N was raped twenty years ago. She did everything right, N. She would always be in a group, always modestly dressed, a rule-follower. And then on that dark, awful day when she was alone for just 15 minutes, she was abducted… N says that she went totally blank. In that pre-cell phone era, the only number she could remember was that of a friend. And he somehow managed to get in touch with his brother to go and fetch/rescue N. The brother dropped N to her college hostel. She didn’t call the police, but the warden did. N says in anguish, ‘Everyone wants to know why Priyanka didn’t call 100, but Priyanka isn’t here to tell us, I am’. Already wounded and in shock, N was so deeply traumatised by the questioning of the police, she decided to drop it entirely. Her parents who lived abroad came to fetch her and all of them disappeared from the house of horrors. N says that other than her parents only her partner knew about the brutality she had been subjected to. And the guilt felt by her parents hasn’t faded in over twenty years. ‘Imagine what Priyanka’s sister will go through’, muses N.
N thinks perhaps in another twenty years, she may find the strength to speak her truth. She feels deeply triggered and retreats further into silence when she hears people ask questions like, ‘Why didn’t Priyanka call the police?’

Most men and a large number of women do not get the magnitude of the problem. Most of them are in denial. Like Kisa Gotami and the man in my story they have not done the long walk of accumulating the truth, ending in a full circle at their own doorsteps. Buddha could have easily told the Kisa Gotami that its not possible to bring a dead child back to life. But she needed to learn it for herself. All of us need recalibration and retraining, not just the police and the political disposition that think that sexual abuse is ‘chhoti-moti chhed-chhad’, all of us. We need to introspect how both the stories, of the survivor-victim and the rapist are our stories, how we have helped shape both these narratives. Self-examination is key, both within and without. Both on an individual level and on a societal level. The victim and the perpetrator belong to our land. If one is the daughter of the land, the other is the son of the land.
—————